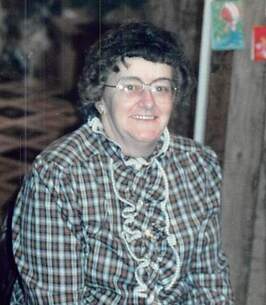 ROCKPORT………………….Frances Raffa Ludwick, 90, formerly of Camden, died on April 4, 2022 in Portland. Born in Camden on December 23, 1931, she was the daughter of William Henry and Carrie Giannina (Raffa) Carleton. A 1950 graduate of Rockport High School, Frances married Walter “Chuck” Ludwick in 1951.
One of the popular school “lunch ladies”, Frances worked for many years in all of the Camden-Rockport School cafeterias, where she enjoyed serving meals to all of the cute children every day. She didn’t retire until she was well into her 80’s.
Loving all crafts, Frances mostly enjoyed knitting lovingly making unique sweaters for her family, including many hats, mittens and even a poncho. Her music genre was country western much to the chagrin of her children. She enjoyed playing records then advancing to 8 track tapes of her favorite country singers. In addition, she enjoyed playing the piano and accordion in her younger years. Frances loved working on jigsaw puzzles, crossword puzzles and word puzzles.
When her daughters were growing up, Frances often sewed dresses for school, dances, proms and special occasions for the girls. In her later years, she attended ceramic classes with her daughters and painted many Christmas ornaments and gifts for friends and family. Above all, Frances loved her family and enjoyed planning family gathering to celebrate birthdays and holidays. Celebrations and gatherings were most important to Frances and she did most of the cooking and baking. Her spaghetti and meatballs and homemade pies were the best!
Camden and Rockport harbor were her favorite places. Together with Chuck, they often enjoyed picnics at Walker Park or Rockport Marine Park where they could sit and watch the boat traffic and fisherman.
Gibson, aka “Honey Bun”, her dog was her constant companion for the past ten years. Frances enjoyed getting her exercise by walking the dog whenever she could.
The family wishes to extend their appreciation to Kimberly Pendleton, a special friend and caregiver who provided wonderful care to Frances.
Frances was predeceased by her husband of 58 years, Walter Ludwick in 2009, brother, William Carleton, sisters, Ann Barnard, Grace Higgins, and special nephew, Harvey King; sons-in-law, Paul Barrows and Lloyd Storey. Surviving are her children, Suzan Ludwick of Hope, Walter Ralph Ludwick and his wife, Linda Blackler-Ludwick of Waldoboro; Wanda Storey and her partner, Rocco Corsetti of Westbrook; Bobbi Barrows of Rockport; her brother, James Carleton of Rockport; seven grandchildren, Bridget Kimball of Lincolnville, Blaze Ludwick and his wife, Buffy, of Searsmont, Zachary Storey and his wife, Teresa of Buxton, Elliot Storey and his wife, Giana of Westbrook, Nicholas Barrows and his partner, Molly Zagajewski of NY, Christopher Barrows and his wife, Frannie of CO, and William Barrows of Rockport; great-grandchildren, Jacob McFarland, Jade Ludwick, Geneveve Storey, Leah Storey, Sylar Storey, Gage Storey, Ryker Storey and Celente Storey, and several nieces and nephews.
A graveside service will be held at 11AM, Saturday, May 7, 2022 at the Mountain View Cemetery in Camden. Memorial gifts may be made to Meals On Wheels, c/o MCH Inc., 46 Summer Street, Rockland, ME 04843. Condolences may be shared at www.longfuneralhomecamden. Arrangements are with the Long Funeral Home, 9 Mountain Street, Camden.