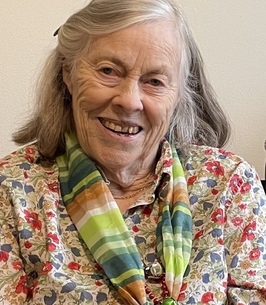 Camden........... Ann Blain Bixler died peacefully on Thursday, September 1, 2022, just 10 days past
her 93 rd birthday, in the Courtyard at Quarry Hill with family by her side. There was no long
illness, and she had a summer complete with Canadian family visiting after a long Covid delay, a
wonderful Bay Chamber concert, and a 93 rd birthday party complete with chocolate cake, so she
just decided to go out on a high note.
Ann was born in Toronto, Canada, on August 22, 1929, the daughter of Monro and Marjorie
Blain, and was very proud to be a Canadian. She eventually became a US citizen for the express
purpose to negate her husband’s vote, or so she told people. Ann got her bachelor’s degree in
anthropology at Victoria College at the University of Toronto, a master’s in student personnel
administration from Syracuse University, and went on to be a dean of students at Simmons
College. Ann met Harris J. “Pete” Bixler in London while taking a gap year to teach in England.
Pete courted her by taking her to classical concerts, operas, and the ballet. They married in
1956, and they continued to enjoy such cultural events throughout their marriage.
Ann and Pete had their daughters, Sarah and Alleson, while living in Lexington, MA. At that time
Ann became involved with the Women’s Educational and Industrial Union in Boston, an
organization started in the 19 th century to champion the rights of women and children. While
there, Ann worked at Companions Unlimited to provide companionship to the elderly in their
homes. Ann and Pete also took in young, unmarried, pregnant women, who had been shunned
by their families, through Catholic Charities. Ann also wanted to show her daughters the
enchantment of the arts and took them to productions at the Boston Children’s Theater when
they were very young, and kept them very aware of their roots by taking them on epic 12-hour
road trips, usually in one of her beloved Citroens, to visit her sisters and their families in
Canada. There they enjoyed plays at the Shaw Festival in Niagara on the Lake and Shakespeare
at the Stratford Festival, which Ann had attended off and on since the 1950s.
In 1970 the family moved to Camden, when Pete started working at Marine Colloids in
Rockland. Maine was the perfect fit, and Ann absolutely loved living here. Camden was the
ideal place to raise their girls, shooing them out the door in the morning and calling them home
at the end of the day with the ringing of a cowbell. A core group of dear friends and their
families celebrated Thanksgiving and New Year’s Eve annually. Ann became involved in the
community by joining the Camden Garden Club, sitting on various scholarship committees, and
being the long-time (and sometimes long-suffering as it was in the era long before the cut-and-
paste convenience of computers) secretary of her beloved Monday Club. Ann also taught a
crewel embroidery class from her Camden home in the early 70s, and to this day members of
that same class gather on Tuesday afternoons, with the next generation eventually joining, to
do what women do when they have needles in their hands: chat, catch up, laugh, commiserate,
support, and find peace in the gathering of friends. Some have been in the group for nearly 50
years, and it was a constant source of good friendships for Ann.

Ever the go-getter, Pete had a couple more moves up his sleeve, and he and Ann eventually
were able to buy a beautiful point of land and build their dream home, Browns Head, in
Northport. Despite the distance, Ann continued her Camden connections while making more in
the Bayside area. This was the place where family gathered to enjoy each other and the beauty
that is Maine.
Ann is survived by her husband, Harris J. “Pete” Bixler, daughters Sarah Bixler (Christopher
Tonkin) of Arlington, MA., Alleson Bixler (Dash) of Camden, granddaughters Lizzie Tonkin of
Madison, WI, and India Tonkin of Arlington, MA, sisters Sheila Metcalfe and Karen Coward
(Rick), and her very special, road-warrior niece, Jen Metcalfe, who has kept the Canada to
Maine transit line open for years, plus many other nieces and nephews, of Ontario, Canada.
The family would like to thank the dedicated help over the years from Bruce Ladd of Lincolnville
and Heather Leach of Waldo, whose immense dedication to Ann enabled her to stay at home
for as long as was feasible. And also, the very dedicated and loving staff in the Courtyard at
Quarry Hill, who took such wonderful care of Ann over the three years she was there, and made
sure to crack open a window, when she was passing, so her spirit could catch that first-of-fall
cool, crisp Canadian air and ride it home.
The family will have a private memorial with no public service planned.
Memorial contributions may be sent to Bay Chamber Concerts and Music School, PO Box 599,
Rockport, ME 04956.
Condolences and memories may be shared at www.longfuneralhomecamden.com.
Arrangements are with the Long Funeral Home & Cremation Service, 9 Mountain Street,
Camden.